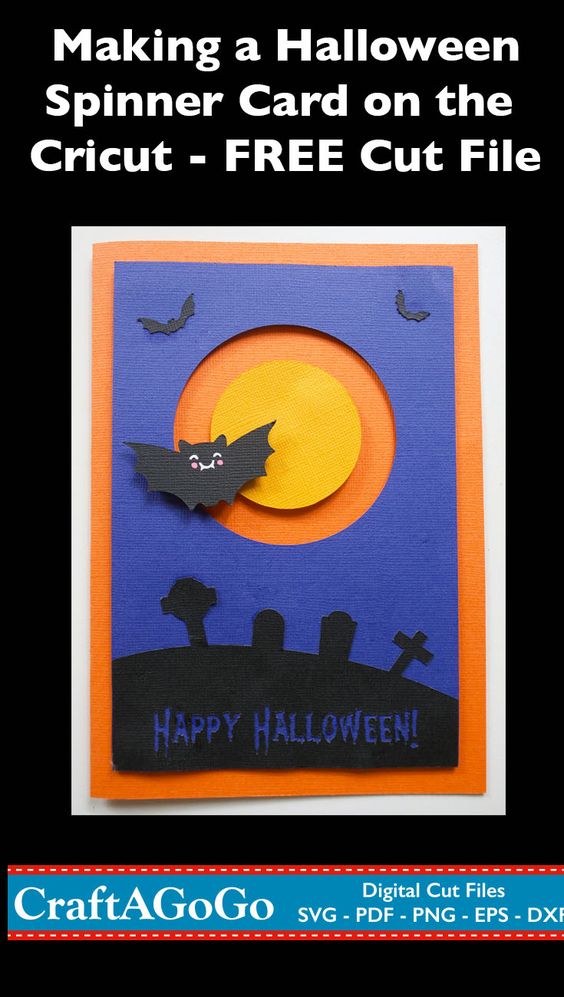 It’s getting a bit cooler, so…here’s a Halloween card! I’m a traditionalist…or maybe just old, so I’m aching to type ‘Hallowe’en’, in the same way as I’m prone to write ‘influenza’ and ”phone.’ In my day (which really was so, so many days ago) all we did was something to celebrate the Eve of All Hallows was something called ‘duck apples’, i.e. bobbing your head in a dish of water to retrieve a segment of apple (which I found tremendously exciting – is that worrying?!), this sort of apple-on-a-string game (you had to eat an apple that was hanging from a string…) and, if you were really rebellious, you might throw a few eggs/bit of flour at a neighbour’s house (I would never have dreamt of such a thing. Looking back, it was probably fun though. Damn!).

Then…ET happened, and ‘Trick or Treat’ and other more elaborate Halloween celebrations came to the UK, and so in anticipation of the end of October, let’s get cracking on this card!

Our card features a bat spinning – fairly aimlessly, but joyfully – around a circle, on a backdrop that’s a silhouette of a graveyard. You could just make it as a simple bat, OR in the kawaii version (i.e. with the cute face) shown. Be warned though – it is VERY scary. I won’t be held accountable for any consequences resulting from you recklessly giving this card to the innocent.

You will need (supplies):

You will need (tools): 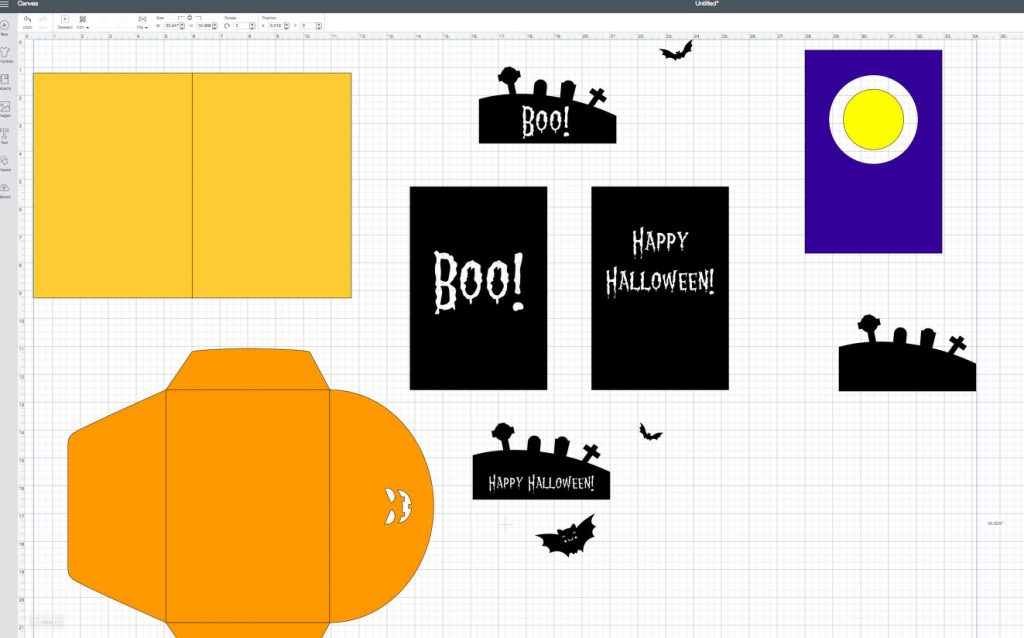 Now, you need to click on ‘Ungroup’, and delete the pieces you don’t want to use. You’ll want to use most of them, but the ones you delete are probably some of the the black pieces. I’ve decided that I want my graveyard silhouette to have the ‘Happy Halloween!’ message in it, so I’m deleting all of the gravestone sections APART FROM the one that says ‘Happy Halloween!’ Also, I’ve decided I don’t want any ‘sentiment’ inside, so I’m deleting the black rectangles with ‘Boo!’ and ‘Happy Halloween!’ in them. They’re here to give you choices though, so go for what you want! Please note: I’m keeping ALL of the bats! 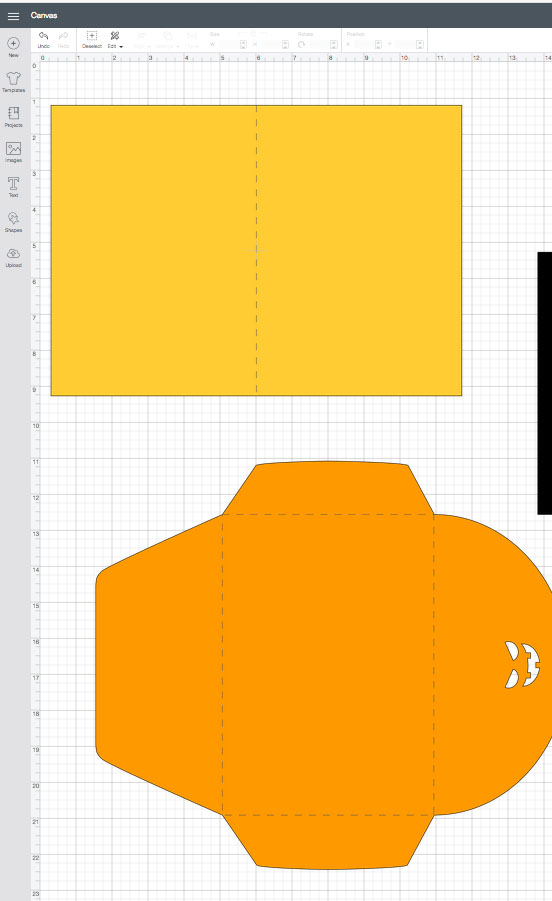 4. Choose the large orange rectangle of the card and the line you’ve just converted. (You can choose them both on the canvas, OR in the right-hand menu – to choose more than one item at a time, press shift and then the item – and then click on ‘Attach’ at the bottom of the right-hand menu OR right-click and choose ‘Attach’ from the drop-down menu.

5. Now, the only pieces you need to convert are the folds in the envelope. On the larger orange piece this is a single rectangle, and on the inner part of the envelope it’s four different score lines. (PLEASE NOTE: Though they are different colours in the files, I cut them in orange and black – I didn’t do them the same colour as the pieces of the card, though, as they were cut from a different, larger material (heavy paper in orange and black). Once you’ve ungrouped them, and converted the appropriate lines to score lines, selecting the scored rectangle (for the large piece, with the face cut out of it!) and then right click and choose ‘Attach’ (or simply choose ‘Attach’ from the bottom of the right-hand menu) and then the four lines from the smaller envelope piece (before attaching them to the smaller piece.

6. You might also have to ungroup the face of the largest bat from the bat itself.

Now, you should be ready to click on ‘Make It’! 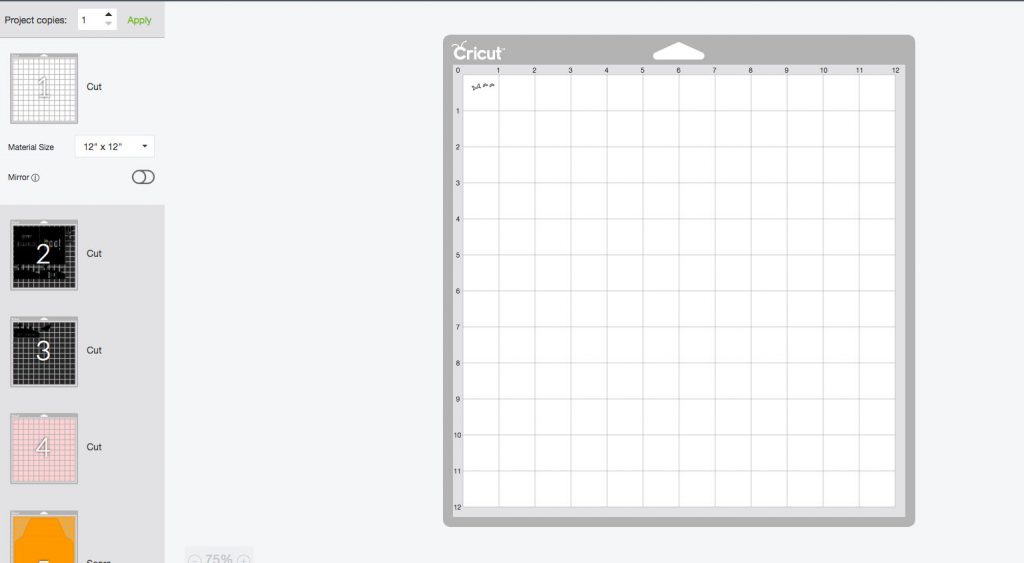 2. All of the other pieces (apart from the TINY pink cheek sections, which are also meant to be cut from Oracal 651), are to be cut from cardstock (reminder – I’m using a 216gsm textured cardstock but most cardstock in the right colours will work!)

3. Once you’ve cut everything your machine suggests, you should have the following pieces: 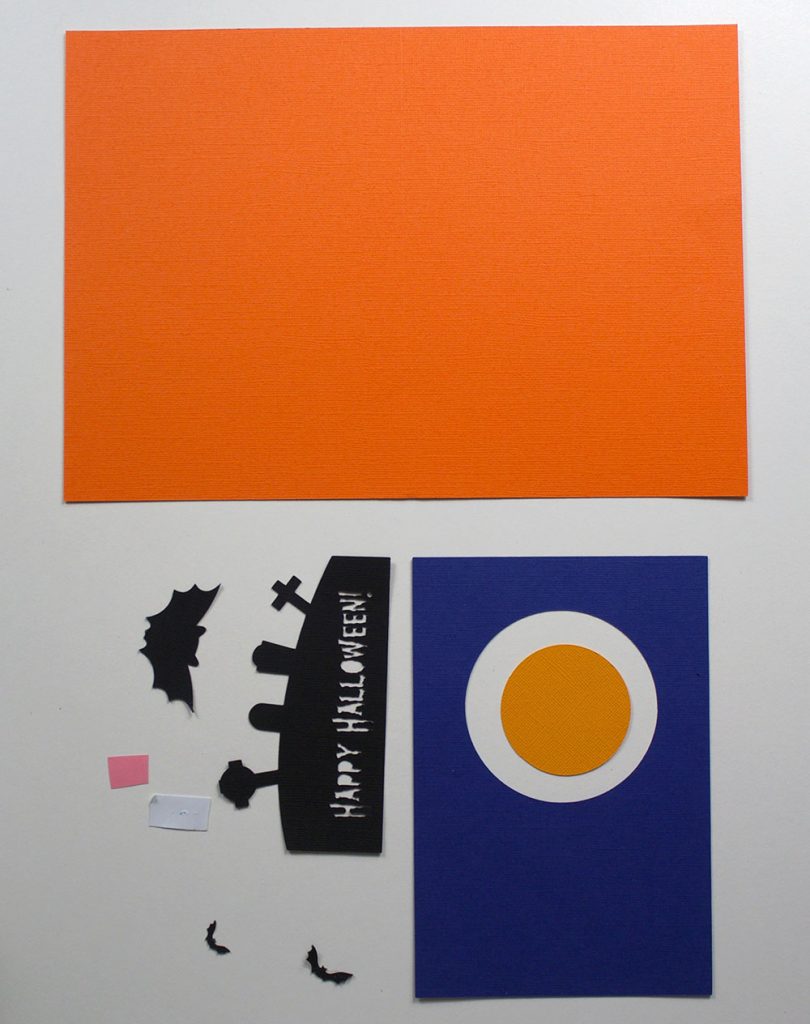 4. The first thing to do is take those TINY pieces of Oracal 651 and transfer the features (we’re talking two eyelids and a set of fangs from the white vinyl and two circular cheeks from the pink vinyl!) two the largest cardstock black bat. I used the Cricut tweezers – it was fiddly but not *that* difficult. This was the result: 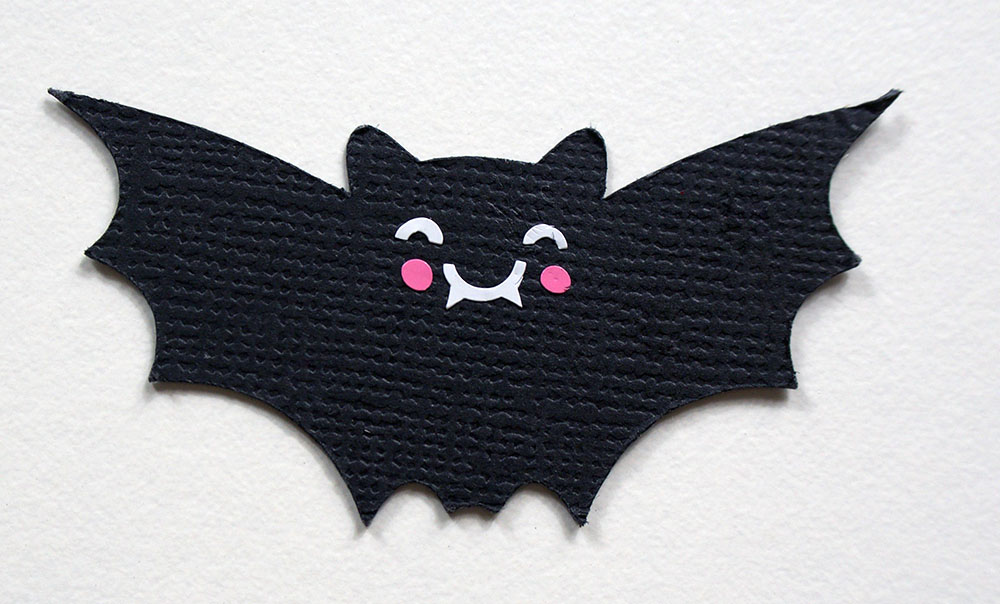 Honestly, if this doesn’t cheer you up or (more likely) TERRIFY you then I don’t know what to say to you.

4. Fold the larger darker orange piece in half (i.e. down the central score line, so it folds like a card).

5. Now, take the ‘sky (bluey) and ‘central moon’ (lighter orange) pieces and apply the sticky foam pads to them as shown in the image below). We’re applying TWO layers of them (so they stand back a bit from the actual card). I need to admit now – I didn’t use the highest-quality foam pads, and I just kept sticking to my own card. To the point where, if I put it in the post initially, I would have been attached to it (along with the postman and several sorting office staff) by the time the recipient opened it. HOWEVER, I persevered! And it looked like this (Please note I’m only attaching glue to the central part of the moon, and the blue sky bit…not the darker orange – I’m worried I’m confusing you because in this photo it’s lying down on the darker orange piece which it will be ultimately glued to!) Just to reiterate: put the glue pads on in the configuration shown and then put pads DIRECTLY on top, so there are two layers! (We want the card to stand out). Another thing to note: we have to leave enough space around the circle on the blue, and the circle on the lighter (central) orange piece, for the coins that work the spinner to be able to move around properly. 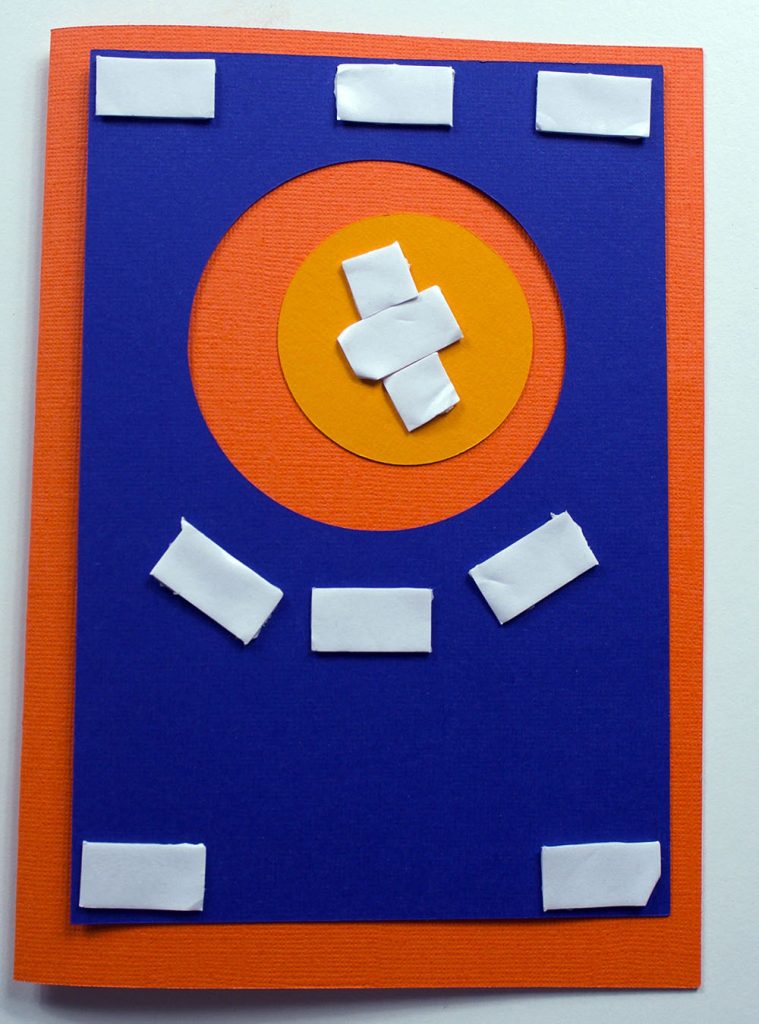 6. Turn over the pieces and glue them to that base, folded-over, darker orange piece: 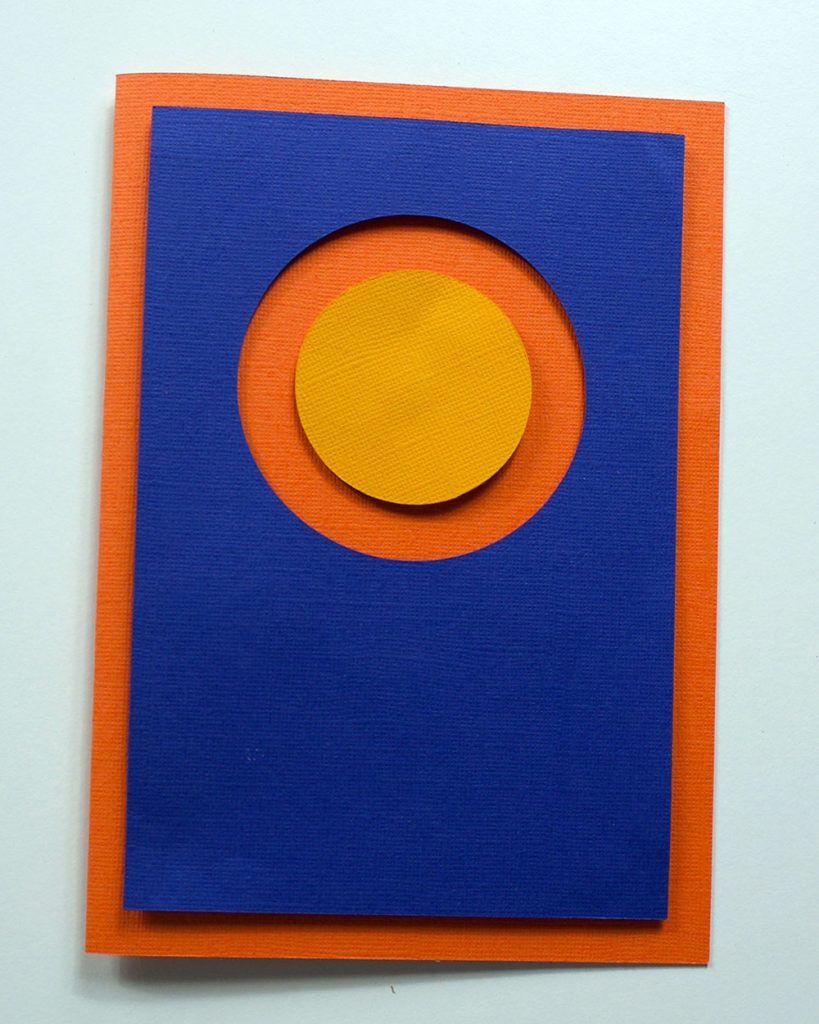 7. Now, we need to take those two pennies. A lot of people online will have you believe you have to buy specially-shaped pieces of foam adhesive to make this work BUT YOU REALLY DON’T! Double up those adhesive foam pads again (i.e, attach one foam pad to another, so you have a double thickness) and cut the resulting piece into a hexagon (i.e six-sided) shape that’s a bit smaller than the coins you are using. Attach the hexagon to the centre (take care with this!) of one of your pennies, and attach the other penny to the top of it.

Now…nobody (least of all me) is going to pretend that this is a useful photo (below). But what you need to think is that – this is TWO hexagon shapes cut from that foam vinyl tape (or pads), joined together (to double their thickness) before they were positioned bang in the middle of a penny…and another penny was stuck on top. It sounds mad but stick with it (and please excuse the pun): it works! 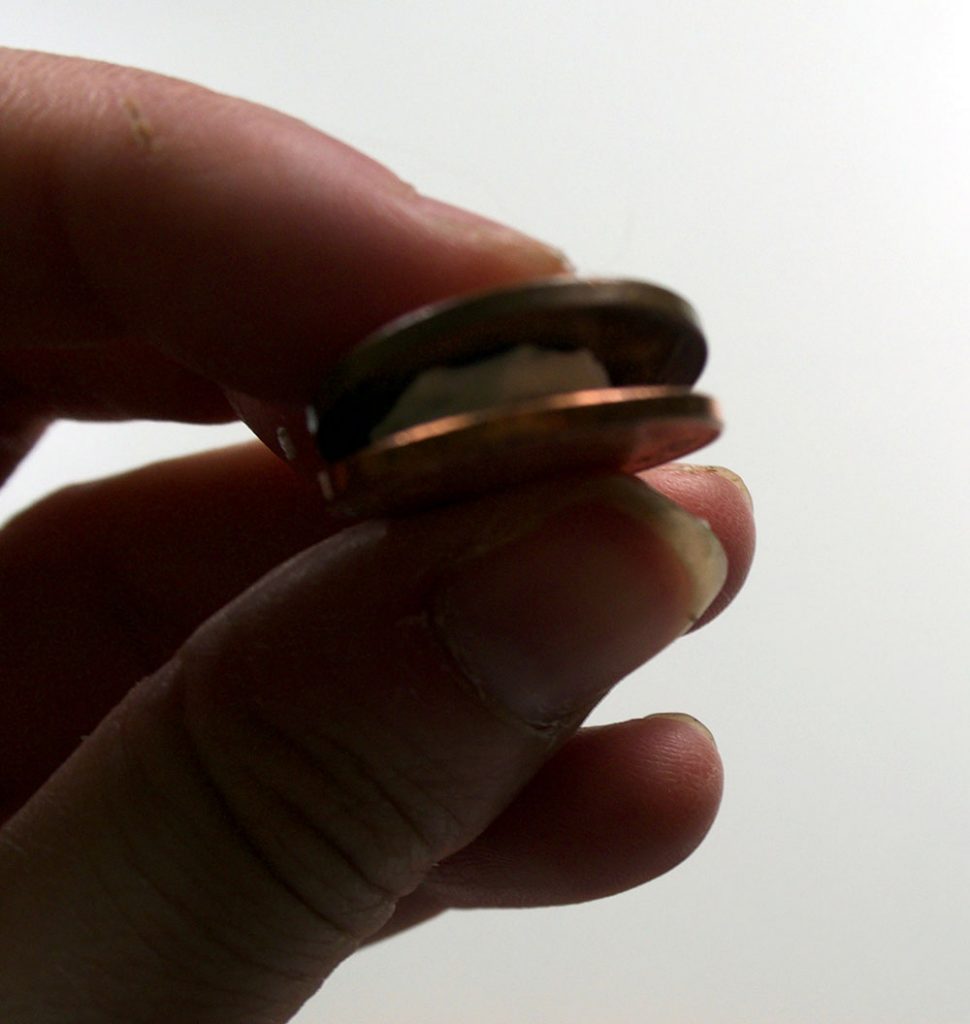 8. Apply a large glue dot to the top of one of the pennies and stick your lovely kawaii bat to it. Slide the ridges of the bottom penny beneath the outer ring and central circle of the card you assembled earlier. 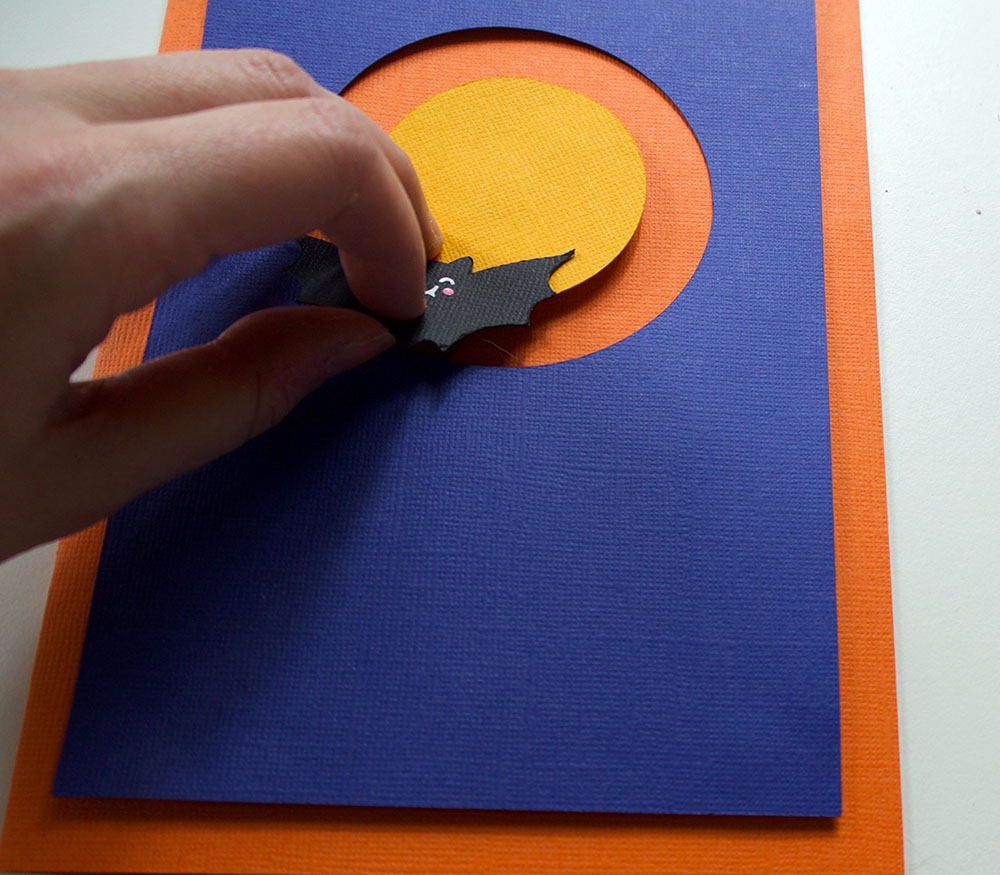 9. Now that’s done, it’s time to finish off the details on the front of the card. Glue the graveyard piece to the bottom of the card. (If you cut the piece without the message then you can attach it fairly easily – if you included a sentiment (!) as we did (‘Happy Halloween!’) then you will have to retrieve the middles of various letters from the cutting mat and glue them on as appropriate: 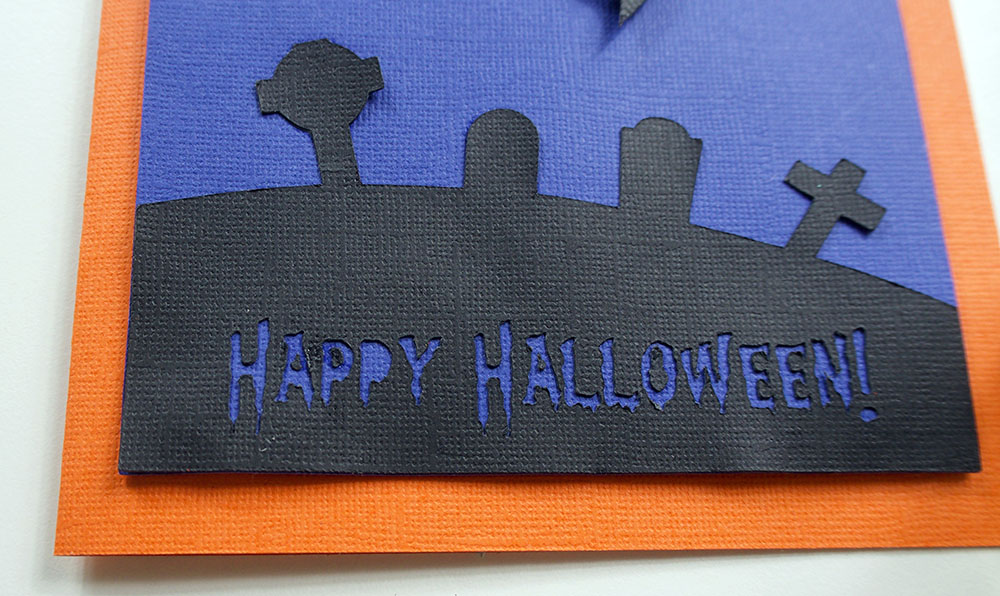 And don’t forget to glue the remaining pair of bats at the top! 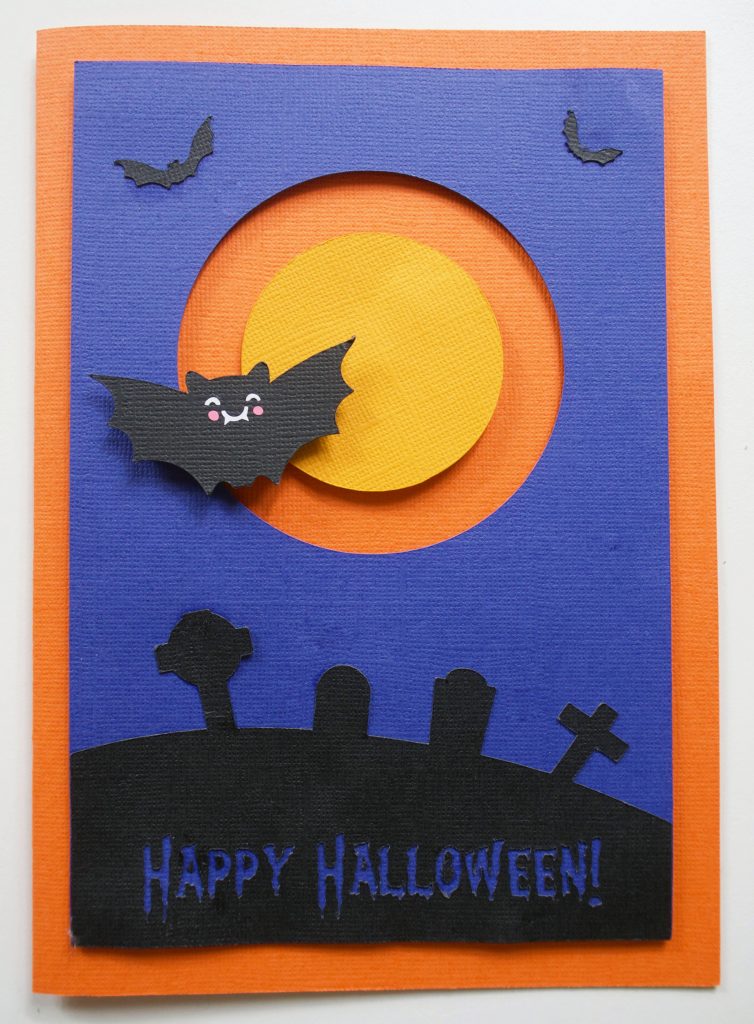 And the bat should move around freely. If you have any problems at all, though, please don’t hesitate to drop us a line and we’ll sort it out for you!

Making the Envelope for the Halloween Card:

Making the envelope is even easier! There are just two pieces (if you followed the earlier instructions about score lines). Fold over all of those score lines and position the slightly smaller piece over the larger piece (which has a terrifying pumpkin face cut out of it of course) and glue (sparingly, at the joins. I use a Pritt-type glue stick for this, as a wetter glue like PVA can make the card warp). 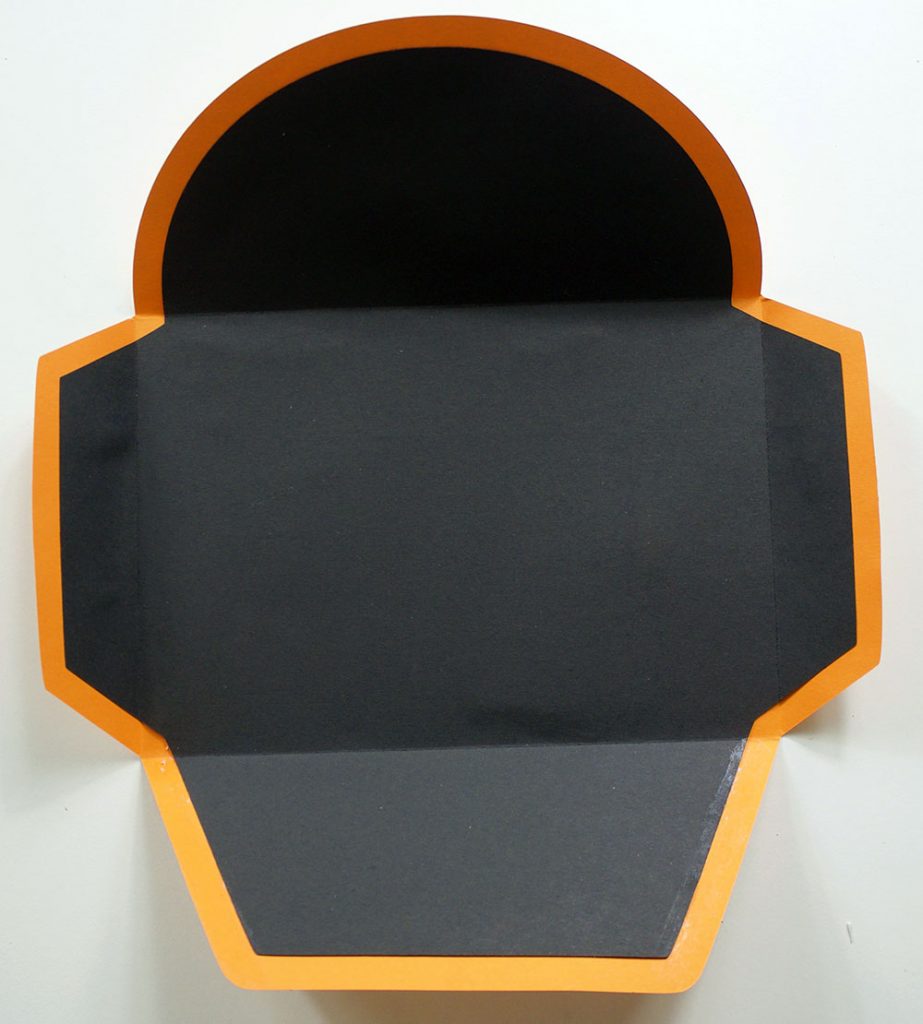 Once is is joined, apply glue sparingly to the edges and fold over as shown. 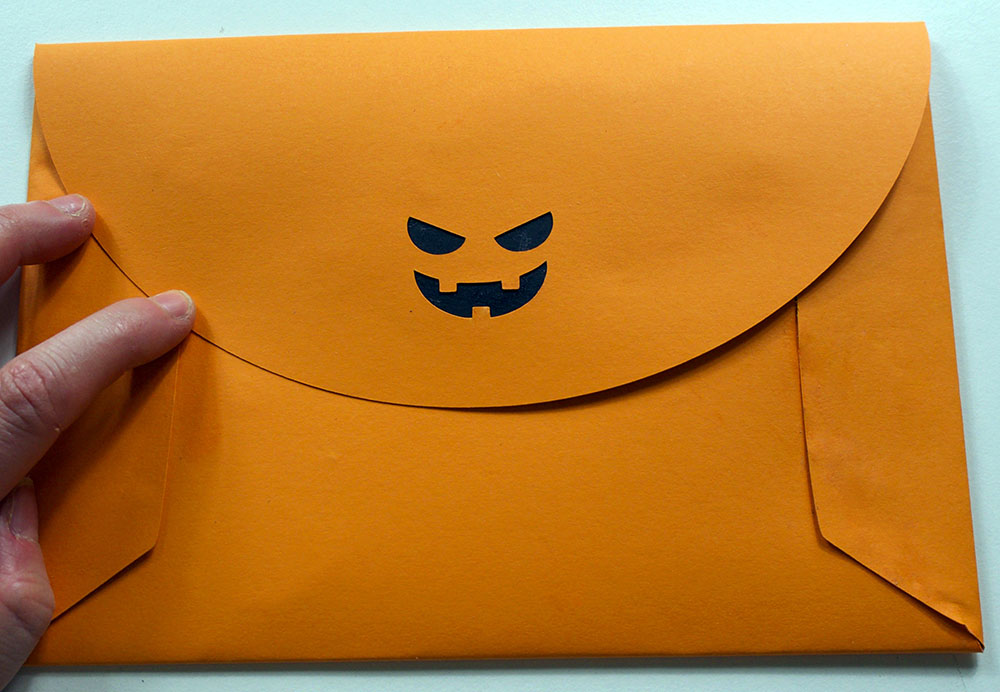 I think we’re there!

Fancy a go yourself? Then get the files for the card AND the envelope by filling in the form below:

And don’t forget to let us know how you get on making this or our other projects in the CraftAGoGo Crucial Crafting Facebook group!